August 12, 2014
Blood is one of those games that many newer gamers stumble upon and assume it's an obscure hidden gem. Considering it got a sequel many years before Duke did (and SW, if you count the 2013 reboot) and received several expansion packs it was fairly well known. Having said that, if you're reading this and haven't heard of it for some reason, Blood is a Build engine game by Monolith. Duke's theme was an alien invasion, Shadow Warriors a Kung-fu film, and Blood's was a pulp-horror theme. Deathwish is a full campaign of over 30 levels for Blood, and one of the best mods I've ever played.

Made solely by Bloatoid, Deathwish is set long after the events of Blood. Tchernobog (the badguy of Blood) is back, and Caleb's job is to travel through 3 full length episodes to defeat his arch-nemesis once again. The story is delivered through new cutscenes at the start and end of each episode, but more importantly it's also delivered naturally in-game. More on that later. 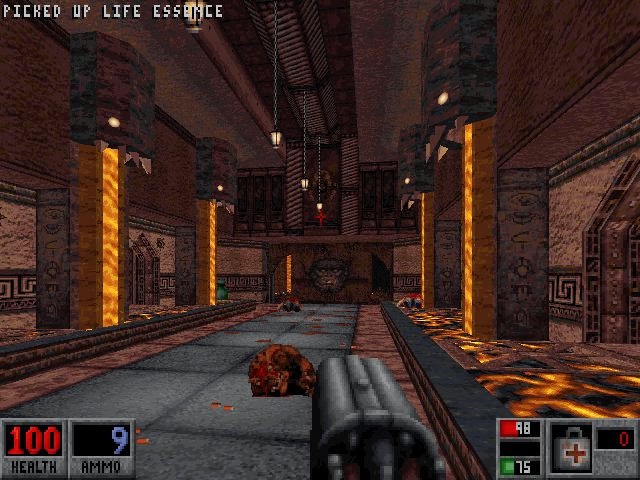 First of all, I can only envy Bloatoid's work on the levels, and the fact it took him barely 2 years to produce all of this amazing content. Each level is a sheer joy to look at and play, with the only shame being that due to the lack of a sourceport if you're not well versed in DosBox or retro play than more likely than not you'll be forced to play this at either a sub-par resolution or framerate. That's nothing to do with the author however since it plagues the entirety of Blood, not just Deathwish. Caleb's journey takes him through a massive array of locations, from standard Blood fare like castles, mines, and ancient cult hideouts (although anything but standard looking) through chilly Thing-inspired arctic outposts, Desert convoys, space-stations, a grapery, a sea-side resort, a silent-hill style town...the amount of themes is vast but most importantly, it never feels gratuitous. Every level naturally flows from one to the other...even the secret levels once beaten actually lead to a further remixed version of the level you entered it from, to resume the natural progression of the pack.

Despite using no new textures, Bloatoid puts all of blood's textures to hard work creating a rich atmosphere (rich is fairly pretentious but literally the only way I can think of describing it) It's not just the visuals of the levels however, because nearly all of them have a great scripted sequence or impressive explosion to balance them out and if they don't than even just the atmosphere is enough to keep you moving forward. Tied into this is the mod's storyline and plot - throughout the entire mod you see visions of Tchernobog's prescence, and he'll create traps and hurt the player. There's brief tomes that literally contain a single sentance of text, but they still help set the mood and foreshadow whatever may be around the corner. Deathwish communicates it's relatively simple story well and thorughout the levels, and even uses existing quotes from Caleb in natural ways to help seal the deal on the plot and what's going on. It's a masterful use of the game's default resources to provide exposition in a way many retail games still stumble poorly. It's not terribly complicated, but it's executed well and pushes you onwards. 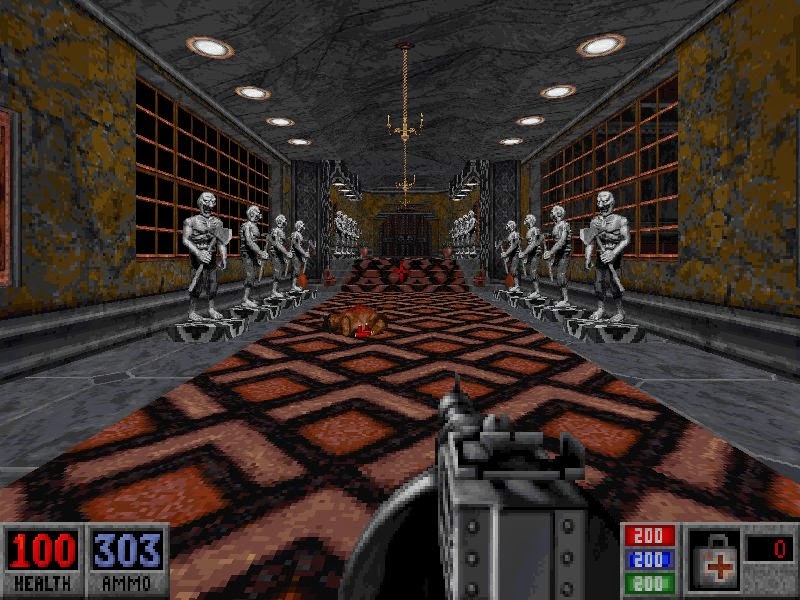 Blood's gameplay is fairly notorious for being  difficult and requiring much more skill and quick-thinking than the other Build games, and Deathwish is no exception (although skill levels are integrated so you'll have an easy time on the easiest skill mode) As with most older games, when modders work on a mod they normally build from many many years of personel gameplay experience to create a fine-tuned experience (at least to their preferences) Much like the level design the gameplay is well balanced and you can find yourself being challenged by large groups of enemies, or smaller amounts of well-placed ones that ambush you. There's an abundance of secrets however so if you're stuck more likely than not you can find a stash of items to help you tip the scales (amazingly, Bloatoid even included 2 seperate walkthroughs - one just for getting through and a fuller one with all secrets and paths to the secret levels) 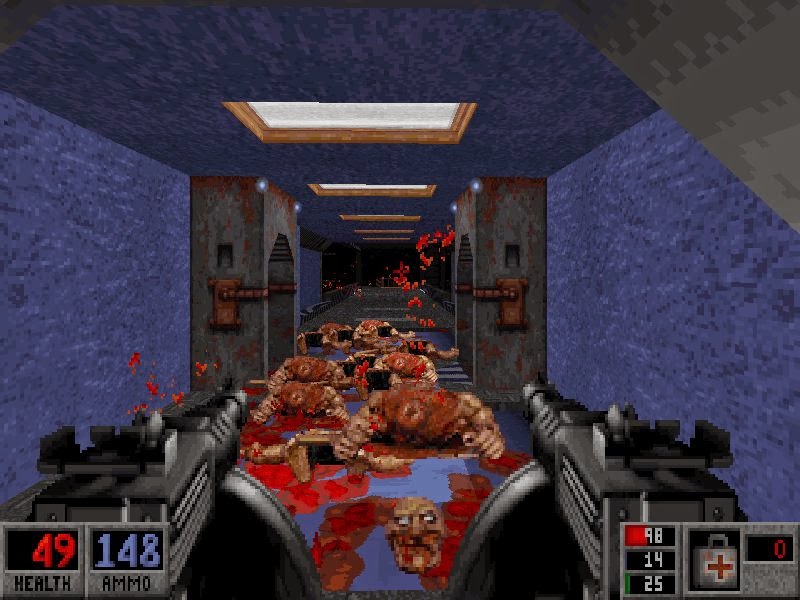 So far it's all gushing praise for Deathwish...and that's really all I can offer, because apart from a few levels that aren't quite as interesting as the rest (The spacestation, whilst well executed, I didn't find too compelling) it's just completely solid all the way through and goes from strength to strength, with constant new ideas and challenges to go through. Most importantly, it's clear the amount of love that went into the mod. Nothing feels rushed or lazy and even the full walkthrough provided shows that Bloatoid thought about the players who aren't so hot with finding secrets or navigating the levels. This could of easily been packaged and sold as a retail expansion of Blood, had it been released back in the day.

Play this mod - if you're playing the GoG version of Blood it's a bit tricky to set up so check the moddb page's comments for more help, but it is 100% worth the effort to play. All of the above puts Deathwish in my best mods of all time category (and makes me cry when I look at my own horrid levels in comparison to Bloatoid's work) 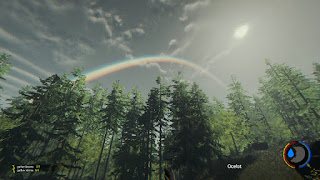 Note: This is my steam review for the Forest - I'm gonna re-post any reviews I write there here, maybe elaborate on them a bit. The Forest is a standout of the survival genre, and is most definitely worth a play even whilst still in early access (version I played was v0.61) The Forest has a basic plot line and a story - unlike most survival games, you have an active goal; to rescue your son. Unlike other games, this isn't handled sloppily or with much exposition; the intro starts and you simply look to your side to see him resting with his head on your shoulder. That's all you need - whilst you CAN ignore the goal and just aim to survive indefinitely, The Forest's true strength lies in unravelling the plot and exploring the many caves dotted around the island. Whilst you have freedom in building stuff and exploring, I feel that the Forest isn't really a sandbox crafting game. There's no tech tree or anything to work through. As you explore the isla 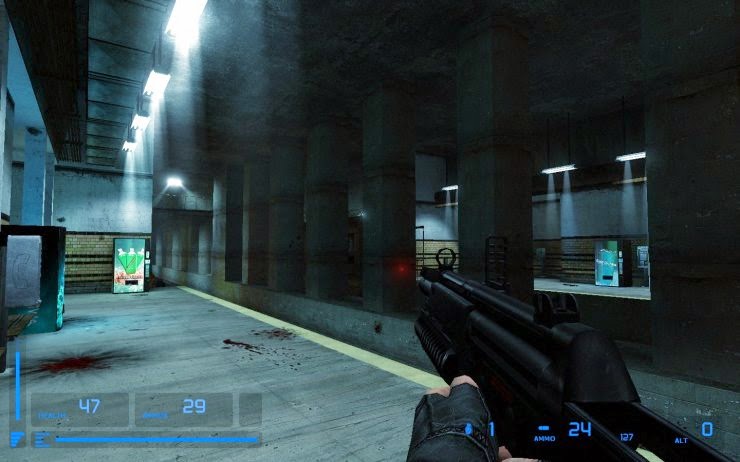